what is the 13 Peaks Challenge? 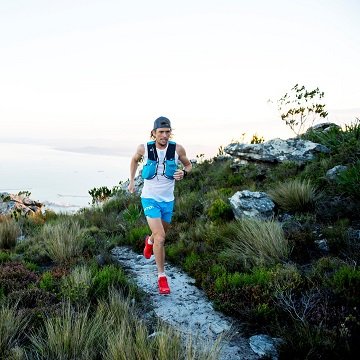 13 Peaks was born from the idea of me wanting to link up some of my favourite peaks on Table Mountain and in the Cape Peninsula area. One evening I sketched those peaks out in my notepad and linked them up in a logical route that would make for a great adventure. I wanted the start and finish to be in the same place to mimic the famous “rounds” in the UK.

The distance between peaks did not look too far on my sketch and I guesstimated it to be about 55km. I convinced my buddy, Kane Reilly to join me for this fun day out, exploring the Cape Peninsula on foot. 19 hours later, having covered over 100km with 6000 meters of vertical we made it off the mountain. We only summited 12.5 peaks due to our headlamp batteries dying but we both described the 13 Peaks experience as one of the most epic mountain adventures we have been on.

There is something really magical about the Table Mountain area and to be able to experience it on foot takes it to a whole new level. Kane and I never completed the full route but we both promised to go back and complete it. This got me thinking … how cool would it be if more people could experience the 13 Peaks.

The 13 Peaks Challenge isn't a race, it's about getting out there and exploring our beautiful wilderness areas. It doesn't matter if you hike or run, take two days or months to complete, the most important thing is you have fun doing it.

There is something really magical about the Table Mountain area and to be able to experience it on foot takes it to a whole new level.

Really quite a mouthful…

Go go @gareth_knott who completed his forth 13 Pea

We love seeing this! Well done to Brett Nattrass,

Well done to Team S.W.E.A.T. on completing their 1

It was a weekend for collecting badges 😎Yeeaaw